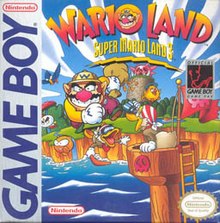 25 Years ago on January 21st 1994, the game boy was graced upon by SML3: Wario Land! a game that not only gave Wario his first playable debut as well as the debut of Captain Syrup and the Black Sugar Gang (Who are some of the best antagonists in the Wario franchise IMO).

but it would also give birth to one of Nintendo's most underrated franchises, The Wario Land franchise, which unfortunately while still on hiatus ATM, has left behind a huge impact and legecy as it would give Wario his own unique identity, world and cast in the same vein that DKC did for Donkey Kong.

So happy birthday to Wario Land (And Captain Syrup by extension)! and let's hope we can get a new installment in the franchise someday.
Last edited: Jan 21, 2019

Wow, 25 years already? It's because of you reminding me about this, or else I'm pretty sure I forgot about it.
Well anyhow, I'm just glad Wario Land is twenty-five years old now.

25 years, huh? Let's hope Nintendo actually decides to celebrate it, though. Probably not, but hey, who knows.

Well, Nintendo did...
nuthin.
Too bad, let's hope the 30 year mark is better.