It's time for another Variety Pack mode; Friendless Battle, which pits one lone crew member against an endless horde of evil clones until they finally get KO'd by one last. Of course, you'll be given plenty of bosses at the x15 (for example, enemy number 115), x30, x45, x60, x80 and x00 milestones to restore your HP, the big one being the x00 big boss, which is always a clone of your current crew member (who cannot show up for any other boss). This game is the Smash knockoff that Wario needs, and is overall my favourite single player Variety Pack minigame.

What are your favourite crew members to take into this mode, as well as what strategies do you use to make them work? What matchups give you trouble, and which ones do they absolutely trivialise? And, of course, what is your high score with that crew member? I do look forward to all your strats.

Of note that this is very similar to Frenemy Frenzy, a multiplayer battle mode, and the speedup and shield powerups are also assigned to this mode's bosses. Also interesting is that 9-Volt has contact damage via skateboard only when he is the player character; AI 9-Volts do not do damage when skating into you.
T

I'll start with my strategy: Kat or Ana. Both are identical, just mirrored.

Most crew members only have one attack option; either a ranged, chip damage attack or a melee, high damage but risky move. Kat/Ana are unique in that they have both! Their auto jump can be exploited to damage bosses, while their ranged shuriken can effectively crowd control during the road to the next boss. Who knew that their greatest weakness in Story would become their ultimate strength here?

As for the bosses themselves, they absolutely destroy Dribble/Spitz. Bait them towards the wall, them let auto jump do the rest. Under or over attackers such as Orbulon or Mike can be cheesed by striking them on the side above or below their attacking range. 5-Volt, if unsupported, is vulnerable to jump melee while tracing an arc around her Game & Wario spirit, and platforming characters like Cricket are vulnerable to attack after a jump, as the AI has a cooldown between its jumps.

However, the absolute worst matchup is their evil twin. The hundredth Ana/Kat boss starts with either superspeed or shielding. Superspeed being the absolute worse of the two. With it, dodging becomes very difficult and sissy baby strats are also a no go. Your only hope really is to either git gud or pray that you have enough HP to tank the shots. Meanwhile, the shield thankfully doesn't change moveset, so destroy it and go for the kill, although shuriken make constant chip damage a worry.
Jimmy T is also quite evil. His dance melee can stunlock Kat/Ana and trap them in a dance combo, racking up huge damage. When combined with leaving you vulnerable to a 5-Volt telefrag due to stunlock, getting him as a boss can be a run-ender. Melee attack is difficult since Jimmy can unexpectedly attack in any direction and the AI has an inconsistent cooldown, and focus fire is also quite difficult without any way to reliably aim shuriken thanks to the usually a blessing auto jump. My strategy here is to take out his second boss if he has one, then chip damaging him until he dies. Mona and Penny can also be quite awful, as their attacks cause a miniscule but still significant knockback, making jumps ineffective, and Penny particularly is very hard to dodge, though she does have a predictable pattern (spray, hover, attack, un-hover, repeat).

My current high score is 899 with Ana, 799 with Kat. Yes, it was the Kat and Ana superboss that demolished me on both runs that got that high score. It's that painful.

My current high score is 499, one short of the mission. I still feel pain.
T

Glowsquid said:
My current high score is 499, one short of the mission. I still feel pain.
Click to expand...

What character is this with? Some characters' superboss is much harder than others; case in point, Kat/Ana. 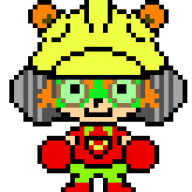 My current High score is 414 with Dribble. I got my hind end kicked by Spitz and Jimmy.

TheDragonFire123 said:
What character is this with? Some characters' superboss is much harder than others; case in point, Kat/Ana.
Click to expand...