Wario in Smash Bros.: Where it Went Wrong and How WE Can Fix It

Hey guys, it’s me, Zard again. Even years before joining the forums, I’ve taken a look through the discussions people have had here, and noticed one of particular interest: the debate on how Wario has been handled in Super Smash Bros. Whether he should be based more on Wario Land than WarioWare, why he has Wario Waft, just to name a few examples. Even though I have had my own strong opinions on the matter, I have never spoken about it publicly because I felt that my words would feel like I’m just parroting what’s already been said 500 times. But now, with more knowledge and physical capabilities than before, I believe it’s time that I give my own personal opinion on where Smash Bros. went wrong with Wario, what things I believe were smart and done well, and most importantly, how we as fans could feasibly make our own ideal Wario.

Before we dive too deep into this topic, however, I would like to address not only what this Wario will consist of, but by what standard as well. Sure, we could mod Wario inside Smash Bros. to make him fit the desired outcome, but after taking a hard look at Smash, its mechanics and technical limitations, I’ve decided to write Smash out of possibilities for where I as a modder could make an ideal Wario, because I feel that the engine, preexisting roster and resources required make using Smash as a base too much unnecessary work. Enter Rivals of Aether, a fast-paced platform fighter with a user-friendly, easy-to-access workshop, where people like you and me can make any character we desire, because of just how open GML is as a coding language. Thus, all moveset ideas for Wario will be made in assumption of this game as the engine, and any changes that you don’t understand may be explained in the replies. Now, on to Wario 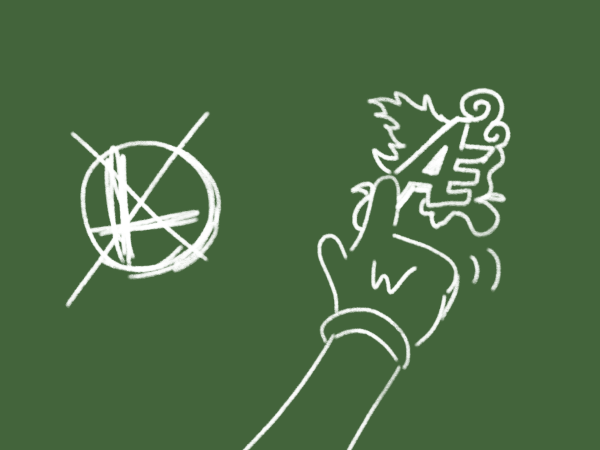 Starting off positive, let’s talk about what Smash Bros. got right when it came to making Wario. Right off the bat, I want to compliment his play style: though the most obvious way to go about Wario would be the slow, powerhouse heavyweight that characters like Ganondorf and Bowser are known for being, I think it’s a lot more unique that Wario is a combo-focused character who trades the long range the aforementioned powerhouses get (as well as a slight amount of damage output) for higher speed, making him a heavyweight that can still play a very rush-down aggressive playstyle, lacking the speed handicap that makes other heavy-hitters so slow and defensive. I also want to bring attention to how well I feel some of the original attacks fit him. The roof-raiser, the clap, the drill dive, the spinning body slam and other attacks feel very true to Wario’s character, even if they don’t come from any particular game. Lastly, the inclusion of the Wario Bike is not only a clever and fun nod to WarioWare, but also plays into Wario’s puzzle-solving tactics in Wario Land, often using his burliness to pick up and throw heavy objects both for puzzles and combat. This was likely unintentional, but it’s a point worth mentioning nonetheless. 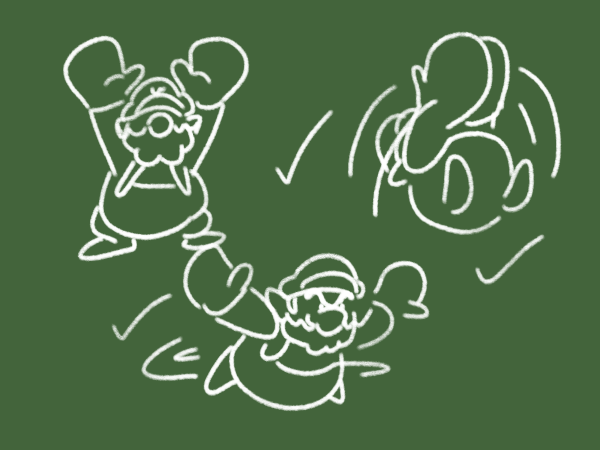 However, there are a few issues that I and many others have with Smash Wario. One minor yet still present issue I have is Wario’s voice; though this is a problem I have with multiple Smash characters, Wario’s lack of true dialogue lines is especially noticeable considering how much of a loud-mouth he is in his home series. Even in victory screens, he speaks primarily in grunts and laughter; no “get outta here!”, no “oh yeah!”, not even a “have a rotten day!”. It makes Wario feel a lot less like himself. But cosmetics aren’t what any of you are here to hear me talk about: let’s talk about Waft for a bit. Now for those who are about to hurt me for not wanting to parrot others’ words, allow me to explain: the issue with Wario Waft for me is not that it does not come from a Wario game. I think that the attack is funny in concept, and if it was from a Wario game, I would be more open to having it present. However, the move presents way more problems than the naked eye might think: Wario Waft actually harms both Wario and the opponent when it comes to game feel. For the opponent, they effectively always play a stock behind Wario because Waft is such a potent and quick kill option, it often lets Wario get one true combo and KO them whenever it’s fully charged. For Wario, however, this also means that his move set for the rest of the match is heavily nerfed. On top of lacking a proper down special for half the battle, Wario’s other attacks, notably throws and smash attacks, are very inefficient when it comes to taking stocks, either being too slow, too weak, or even a mix of both. Wario has no kill throws, despite his status in the Wario Land games, and his apparent upbringing as a grappler-type character. Even his most consistent KO option, back air, doesn’t start killing until around 110%. On top of this, Wario’s game plan becomes very streamlined, and doesn’t promote any creativity or unique approach to a battle. He never wants to leave bike on stage because it’s always better to charge waft, he always fishes for up tilt or up air when Waft is charged, and if all else fails, he can play campy and lame at the ledge until Waft is done charging. It makes what would otherwise be a very unique and interesting character into potentially one of the most boring and/or stressful to fight against, and obviously, that is not what anybody wants for any character, especially not our favorite mustachioed muscleman Wario. 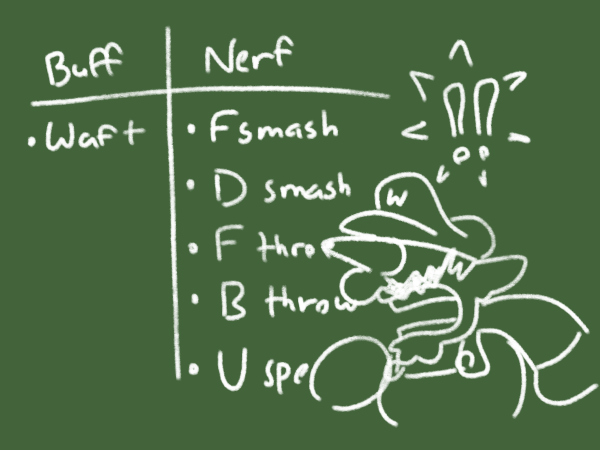 Now that that’s all out of the way, let’s talk about how we want to approach Wario. How do we want him to play? What’s his shtick if we don’t have Waft? Well, let’s start by outlining some core traits that we want to translate from Wario’s home series to our interpretation: historically speaking, Wario is known for his physical strength and mean, bully personality, but when it comes to his own 2D platforming adventures (AKA the best possible base we have to how Wario would control in yet another 2D platforming setting), he has very snappy aerial mobility, and more notably, a knack for using his strength to lift and throw enemies and objects in order to solve puzzles and innovate during combat. Rewinding back to what we said about what worked for Wario in Smash, remnants of all four of these traits are present: snappy air mobility and being a bully are the most expanded upon, but his brute strength is there visually through moves such as his shoulder bash, backhand and throws (even if said moves don’t prove to be the most useful for launching), and he is capable of throwing around his bike for unique approach options. As stated before, Waft normally meant that Bike being on-stage or used for anything more than a recovery or waft-charging tool was often not recommended, but if Waft isn’t here… perhaps we can experiment with this idea, and properly expand upon the Wario Bike in ways Smash never would. 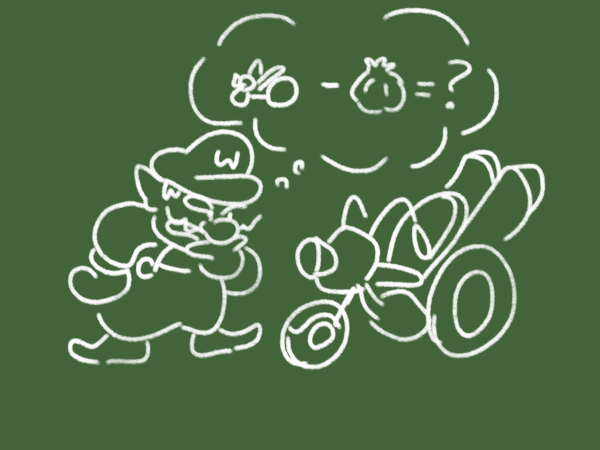 Before moving on to specifics of his moveset, let’s recap: we’re going to be building our own platform-fighter Wario, for use in Rivals of Aether workshop. The main drawback of Wario in Super Smash Bros. is the Wario Waft, and the idea of using his most unique attack, the Wario Bike, has never been properly expanded upon. If we use Smash Wario as a base, and further push the Wario Bike into a more useful and integral part of Wario’s moveset, then not only will the character feel more akin to his home series in Wario Land, but he will also prove to be a deeper and more mechanically interesting character than he currently is in Smash. With that out of the way, let us continue to the next section: our new Wario’s move set.

So we’ve discussed already that the Wario Bike is what we plan to expand upon, so let’s start ny discussing Side Special: the Wario Bike. Overall, this move will be simple enough in concept, roughly mirroring how it functions in Smash Bros. Initiating the move by pressing side special, you’re able to ride the bike, turn with the bike, jump off the bike, all the usuals. However, as we discussed prior, this isn’t Smash Bros we’re dealing with; this is Rivals of Aether, where held items of any sort are non-existent. That means that we can’t pick up the bike using jab or tilts… so what do we do when the bike is left on the ground? 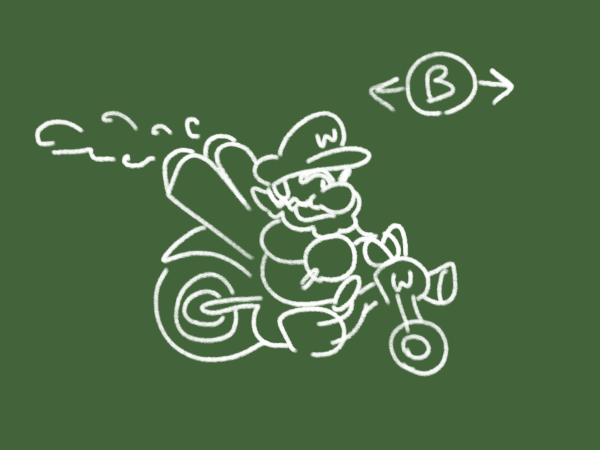 Enter Wario’s new neutral special: Hyper Suction. The move visually looks similar to Wario’s Inhaling Chomp custom move from Smash Bros. for Wii U and 3DS, but don’t be fooled: this move functions quite differently on contact. Upon trapping the opponent, Wario will transition from a chomp to what looks more like a conventional grab. From here, there are three options: pressing forward initiates the overhead toss, mirroring Wario’s throwing animation from Wario Land. Pressing back initiates the Wild Swing-Ding, and pressing up or the jump button initiates the Piledriver. All three of these throws have differing launch angles and knockback statistics, giving each one its own usage in Wario’s move set. Additionally, when used in midair, Wario will perform a front-flip throw similar to Etalus’s up air. 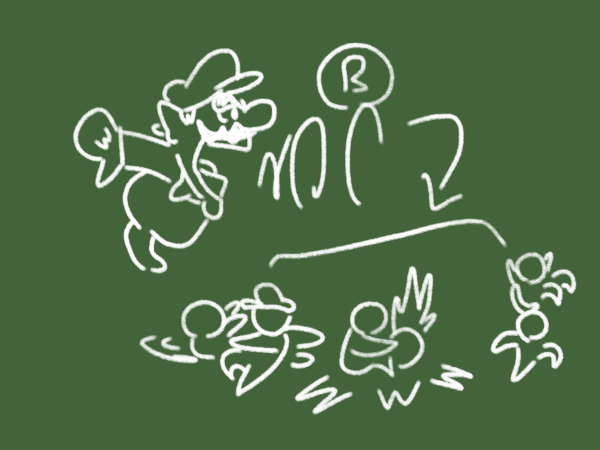 But how does Hyper Suction tie into the bike, you may ask? Very simple: sucking up the bike puts it into Wario’s hand, allowing him to carry it overhead, walk with it, and now even jump with it, ready to hurl it in any direction, acting as his only projectile and a remedy for his lack of range! This means that Wario’s bike is not only a movement and recovery tool, but is also a more reliable and consistent projectile, helping with Wario’s edge-guarding abilities, as well as still functioning as its own attack. 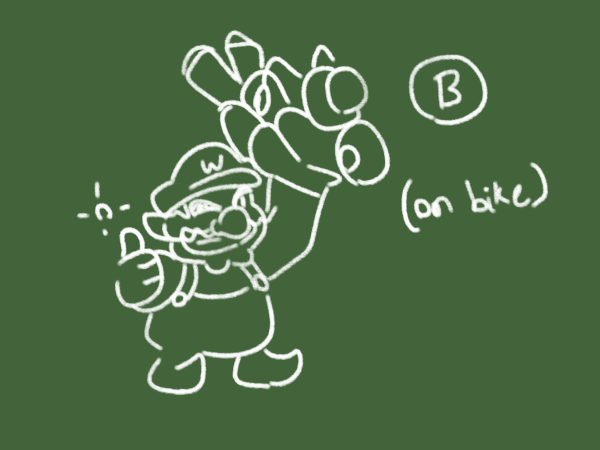 As for his other two specials, the Corkscrew (which I personally nickname the “Wario Whirlwind”) remains the same, as it is still a solid recovery tool, and acts as a parallel to Mario’s spin jump, the Mario Tornado. The down special is replaced with a ground pound, a simple yet effective attack that serves its purpose as a landing option, a relatively powerful KO option, and doesn’t over-complicate the move set. 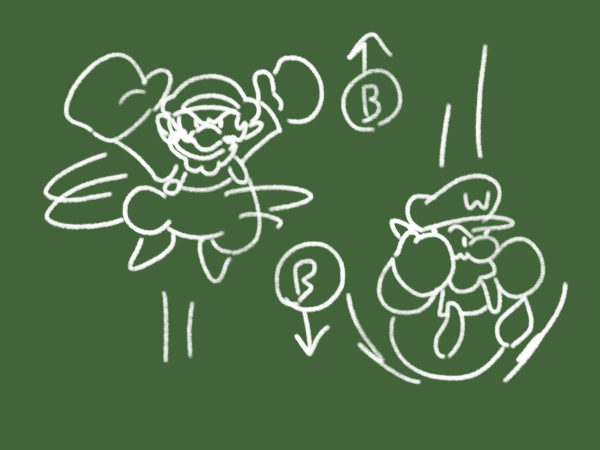 In order to wrap up this very long post, I won’t touch too hard on his normals, but I do plan to take a mix of inspiration from Brawl and Ultimate, as well as primarily Wario Land games for his attacks. Forward Strong will be his Shoulder Bash, his jab will be a three-hit combo with two punches and a belly slam, and his down smash will most likely be the earthquake punch from Wario Land: Shake It, just to clear the air for those who might have been wondering about these attacks. 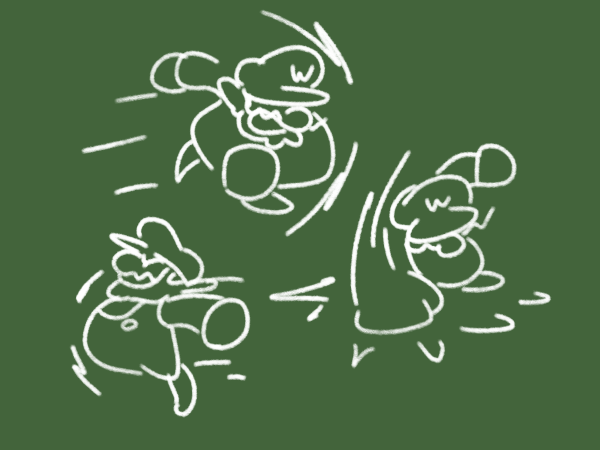 What do you guys think of this potential Wario revision? Could it successfully do what Smash failed to, or does the mechanic surrounding Wario Bike fail to land as hard as anticipated? Let me know down in the replies, thank you for your time, and have a WAAAAH-nderful day!