Fan gaming theories that you believe in?

From ones that actually make sense to those that are fucking insanity, gaming theories are pretty much all the rage these days and thanks to the internet, gaming fan theories are everywhere, with everyone liking to add their own fan theories to a franchise.
But now I have a question, what fan made gaming theories do you actually believe in? either because they make so much sense in context
or personal taste

Personally one fan theory I believe in is the Shiver Star=Earth fan theory.
where basically the fifth star in Kirby 64: the Crystal Shards, Shiver Star is actually a future Earth frozen over due to nuclear war/climate change/whatever. 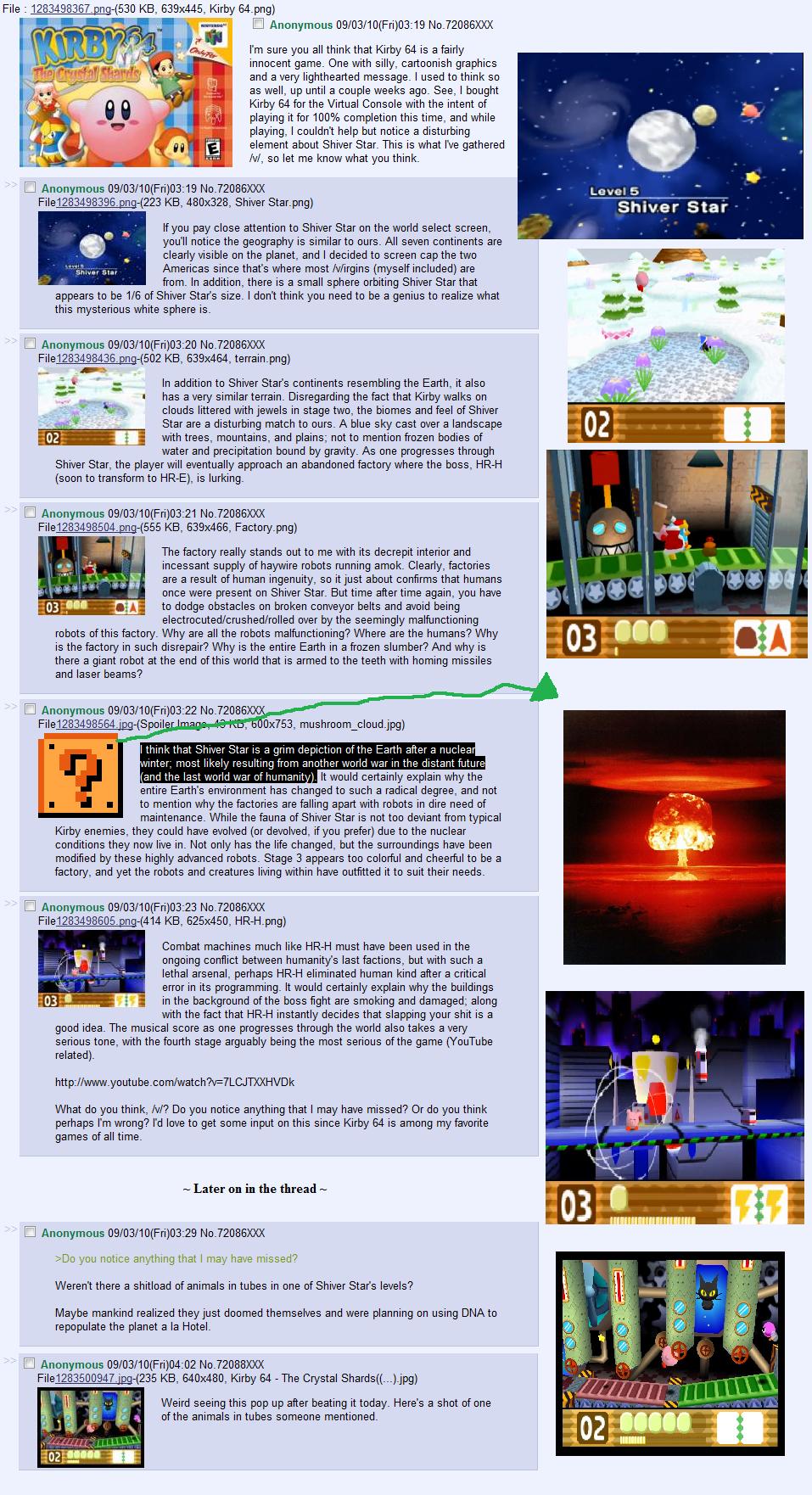 It just makes a lot of sense in context and the evidence for it is very solid.
Last edited: Nov 17, 2018

While I can't think of any gaming theories I believe in, I must say that in the case of Shiver Star, it is pretty clear that it's inspired by planet Earth. While I don't think it's actually Earth, it is obviously made to resemble a frozen Earth; you can easily distinguish the continents, and the little sattelite can only be the Moon.

I also totally agree with the Shiver Star theory, but no other theory right now comes to mind...

Actually there's one I saw once, about Super Smash Bros, saying everyone was a toy, and that Master Hand is just a kid, that grows up along the years, with each game representing his growth.

and I guess if you include Ultimate, either he's still an adult, or an old man, which I think doesn't make sense to be honest.

It's a good theory, although I don't fully agree with it, since if you take a good look into it, the toys aspect was only truly present in Smash 64, in the intro, so I think this kinda exaggerates on that, thus I don't agree with it, but I do consider it a good and very interesting take on the series.

There was a PS1 game called Colony Wars, a space flight combat game that told the tale of a interstellar war between two factions, the earthbound Colonial Navy and the League of Free Worlds.

The game got a sequel, Colony Wars Vengeance, which unusually didn't continue from the best ending of the original game (despite it having a sequel hook), but rather, one of the bad endings, where the League fails to make significant headway into Sol and decides to flee and seal off all warpgates leading to Earth. Vengeance starts as a messianic figure named Kron has managed to reunite the Navy and reopen the warpgate out of Sol.


At the very end, it's revealed Kron was not an Earth native but rather a psychopathic League pilot whose superiors sent on a suicide mission in the final days of the conflict. He crashed to Earth, and started the war to get revenge.


The fan theory is that Kron is the player character from the original Colony Wars. The intended final mission of the original game is set in orbit of Earth pits you, a single fighter against the enemy flagship. Failing it gets you ending 3 - the one Vengeance picks up from. It's rather obvious the original Colony Wars was not written with this twist in mind and the official site from the series doesn't hint at it despite making some really weird retcons to connect the second and third games, but it just makes way too much sense.

Stone Tower Temple in Majora's Mask was built by the ancient Ikana in order to blaspheme the three golden goddesses, hence why the gargoyles are wiping their scrota upon imagery of the triforce. The statue's flaming finger is pointing towards the heavens, along with some phallic imagery, basically saying "fuck you" to the goddesses. I'm not sure I buy the bit about Majora being sent by the goddesses as revenge, though.
You must log in or register to reply here.
Share:
Facebook Twitter Reddit Pinterest WhatsApp Email Share Link
Top