I made Hypothetical Children for Wario 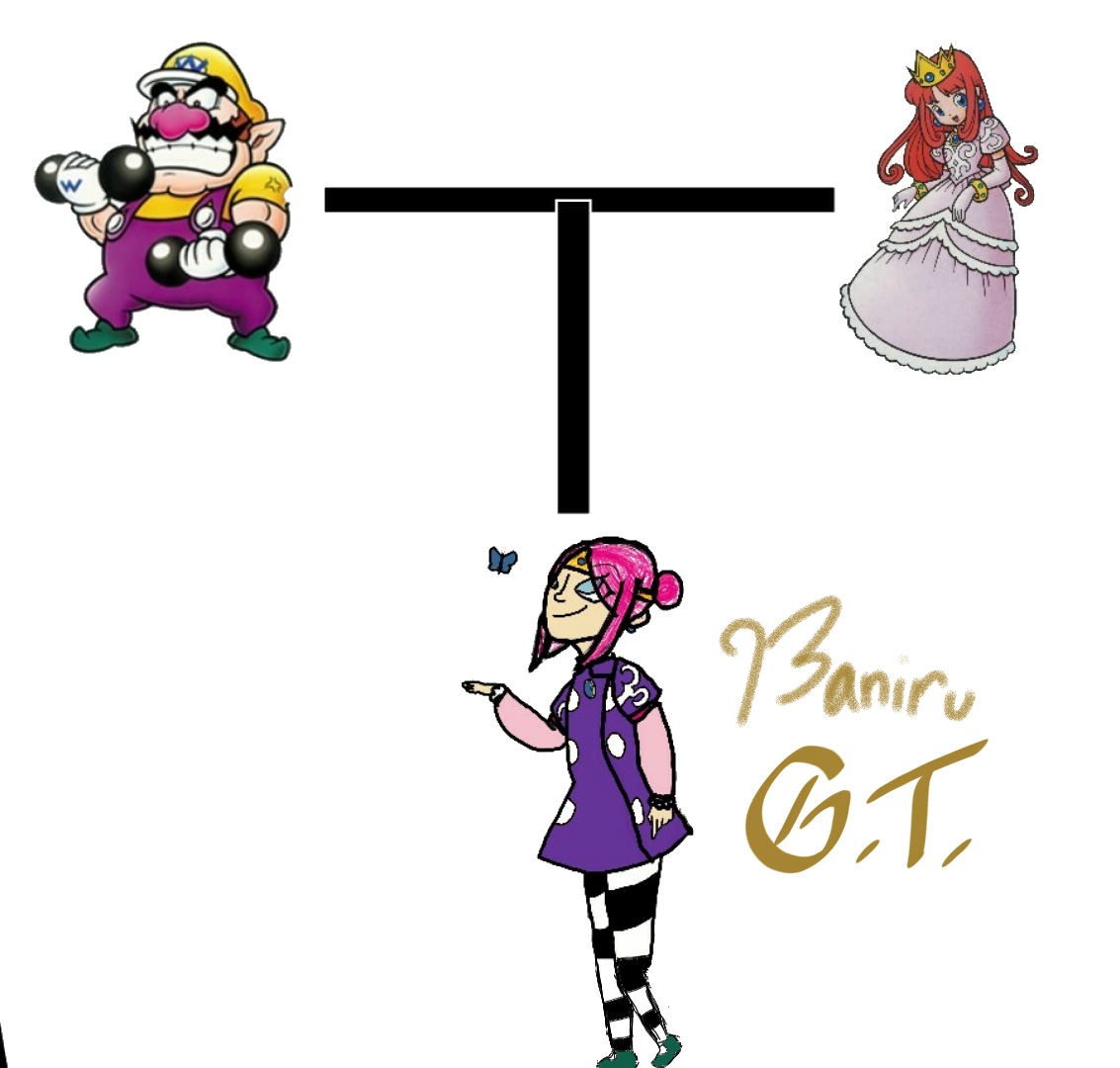 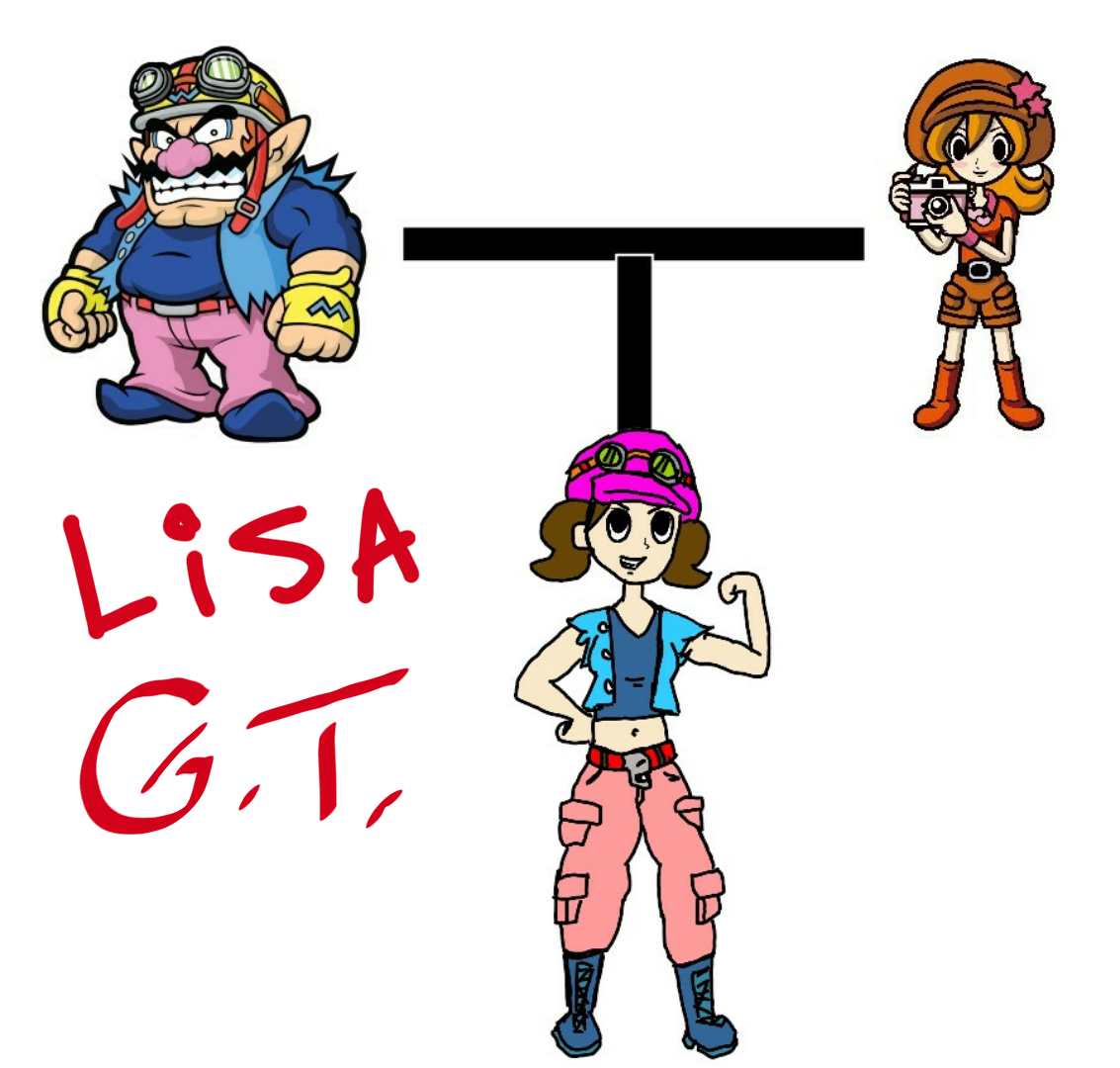 Spare me the thought of Wario procreating.

Anyway, I made some cool Original Donut Steel Characters of hypothetical lil' babs of Wario and his Spider-Man-like rogue gallery of love interests. I've only finished two right now, so here they are:

I drew this with my finger jfc

Baniru was born to Wario and Shokora. She lives at the Golden Pyramid, which Wario renovated using his massive amounts of treasure, into a place suitable for a family to live. It now has butlers, catering, Electricity, air conditioning, you name it. It almost feels like Shokora is royalty again. Considering Wario has plenty of cash, he often just stays at home with his wife and child.

Baniru greatly takes after her mother, from her appearance to her personality, although thanks to her father, she is a bit more adventurous and excitable than her mother is. She often is read to before bed: Wario regals his daughter with tales from his treasure hunting adventures, while Shokora often teaches her the history of the Pyramid and her royal lineage. They both have warned her about the Golden Diva, and have a backup plan in case the Diva is resurrected and ever returns for vengeance.

Baniru, like her mother, tends to turn into a cat during certain magical circumstances. Namely, when she was born, an extra CD materialized in the sound room. When played, it transforms the young Princess from Cat to Human and vice versa. It was therefore named "Baniru's Melody".

The tiara on her head was made by Wario himself, out of solid gold. It was modeled after the Golden Pyramid, with Shokora providing her own jewelry to perfect it. Shokora had taught Baniru how to sew at a young age, and as a result, she sewed Wario's extra overall buttons onto her favorite jacket, as seen here. Baniru means the world to Wario and he is often overprotective of her. He often does whatever she wants him to do, but luckily for him, she doesn't take advantage of it too often.

Baniru is adventurous, curious, kind, and very smart. She has a love of learning and traveling, which she often does with her father. She enjoys traveling through the foliage of the Golden Pyramid, as well as taking visits to Diamond City to visit WarioWare or her "Uncle" Waluigi, whom she is quite fond of.

All in all, their family may not be true royalty anymore, but she is excited to take on the responsibility that comes with the Golden Pyramid.

This is of course an AU where Shoko doesn't bite the dust.

Lisa was born to Wario and Mona in Diamond City Hospital. She grew up in the city, and was pretty popular in school, making a lot of friends. She always was a leader, rather than a follower. She soon dropped out of High School, however, and became a truant. She runs a gang called the "Ankle Biters". Wario said the name was really dumb, but Lisa defended it, and kept it. She rides her own motorcycle, that she herself made. She has many skills, like her mother, but one of her best it engineering, which she learned from Penny Crygor, head of Crygor Labs, whom she calls "Doc".

She is intelligent, hotheaded, and a bit vulgar. She also idolizes her dad, and even wears his old jacket to remind everybody where she comes from and who exactly they are dealing with. She's unusually strong, although not quite as much as her burly pops. She also styles her hair like a popular reporter (From Rhythm Heaven), but thought it looked too lopsided, so she wears one tail on each side. Her relationship with her mother is a bit more strained. Mona isn't happy that her girl quit school and is now a delinquint, and Lisa distances herself from her mother often because she was the best in everything throughout High School and beyond. Taking up tons of jobs at once, being captain of the cheerleading team, etc. Being expected to live up to her mother's legacy was something she coulsn't handle.

Her father, however, was who he was and he didn't change to fit others expectations, so she relates much more with him. Wario doesn't care if she is a little criminal, because Wario is a lot like that himself. He even takes her out to pull heists behind mama's back sometimes. When he's caught, hoooo boy. Mona is a very patient and forgiving wife for all she's got to deal with.

Despite being a thug, Wario's old friends really love her and treat her like family. She has a soft spot for the lot of them, and sees them as extended family herself.

And there we go. Let me know what you think.

Planning on doing Syrup and Merelda too, as well as a horrid demon spawn between Wario and Terrormisu from Master of Disguise. Go ahead and let me know who you'd like to see next.

Some interesting ideas, though I'm not the biggest fan of some of the designs. Seem a bit... fan OC like to me.

Though seeing what the child of Wario/Captain Syrup and Wario/Queen Merelda would be like is different. And the Terrormisu possibility kind of just scares me.

CM30 said:
Some interesting ideas, though I'm not the biggest fan of some of the designs. Seem a bit... fan OC like to me.

Though seeing what the child of Wario/Captain Syrup and Wario/Queen Merelda would be like is different. And the Terrormisu possibility kind of just scares me.
Click to expand...

That's because they are fan OCs. I drew these.

I also would be terrified of such a possibility, but I'm morbidly curious to see what I could come up with!

will you make more

Magma said:
will you make more
Click to expand...

I will eagerly anticipate

Will you give the next bab wariolette an arm cannon?

Metal said:
Will you give the next bab wariolette an arm cannon?
Click to expand...

Please do Shake King/Queen Meralda or better yet, Rudy the Clown/Golden Diva