Possible reason as to why Wario hasn't had any platformers in over a decade?

This is a frequently asked question, but just hear me out, as I kind of want to point some specific details not often brought up. Throughout the N64 and the Gamecube era, There actually existed a subset of Mario "fans" (I use that term very loosely) that claim the Mario franchise had no actual mainline entries after SMW2: Yoshi's Island. By this of course, they are referring to 2D games. It's a stupid rebuttal, but that's besides the point. The actual point is that throughout the N64 and GC era, While Mario focused on evolving and experimenting mostly with the main titles being in 3D, Wario and Yoshi would ultimately take the reign and fill the void for Mario's 2D adventures, Both of which eventually, also kept Mario completely from appearing.

Wario Land's sequels are just one example, But Yoshi was also headed in this direction with Yoshi's Story, which didn't even feature the plumber as a baby. And obviously, around these two eras, we got a lot of Wario Land games, along with Wario World. However, in 2006, Mario would return to his 2D formula in New Super Mario Bros. Something that, at the time - Was praised as the series "returning to it's roots after long abandoning them two decades ago". Throughout the Wii era, Mario would go on to be utilized far more with his own games, and While Shake It!! released in 2008, Guess what else released the very next year?

...I've complained a lot about NSMB's success going to Nintendo's head, but I can't help but feel they also may have been what killed off Wario's adventure entries. For one, they were far cheaper to produce and were giving far better profits. (NSMBWii infamously outselling both of the Galaxy games combined) But even then, with the interest in 2D Mario fading away after it was milked dry... I'd hope that the 2020's would be the best time for Wario to make a comeback...?

maybe? please? What do you all think?

Hmm, I can definitely see NSMB Wii's sales success affecting the development of other 2D platformer series at Nintendo. So that could certainly make Nintendo hesitant to release any more 2D platformers, especially given their original role as replacements for the Mario handheld games.

But at the same time, I'm not entirely convinced. Wario Land isn't that close to Mario gameplay wise, and Nintendo has shown an interest in working on 2D platformers which do enough to set themselves apart in that respect. Like say, Donkey Kong Country, which saw a comeback a few years later and has seemingly done well enough to become one of Nintendo's top series again. Or even Yoshi's Island, which has stilll received games since the NSMB era began.

So I guess the influence of NSMB may have some affect, but something else might be the main reason the Wario Land series stopped getting made. Probably low sales figures as compared to higher development costs.

I'd say Yoshi's Island was the beginning of the end, Miyamoto wanted to give justice to Yoshi and end up rehashing the same game over and over, like what was there anything wrong with the puzzle games?

The division of Nintendo that made the game was dissolved in 2003, two of the three Wario Land directors had already retired by the time that happened, and the underwhelming critical reception and sales figures of the outsourced Wario games that followed probably meant nobody was much enthused about championing the franchise, especially with outsourced Yoshi games doing much better

While there have been some very good and successful non-Mario platformers like Donkey Kong Country Returns that have been released during what I'd call the "NSMB era" of Mario games (Which, in my view, didn't start with New Super Mario Bros. for DS, but with NSMB Wii instead, after the release of Super Mario Galaxy, and only waned when Super Mario Maker was announced), there is certainly an effect that the NSMB series had on other platformers. However, I do not know as to what extent we must see this effect, since it influences each game differently, and unfortunately, it seems to have been most influential on Wario Land, probably because that series is closer in gameplay to Mario platformers than others.

U shouldn't forget that the only successful 2D Nintendo Series that they developed in House were Mario, Wario and Metroid. Things like DK and Kirby are developed by 2-Party. While the division was dissolved in 2003, many of the staff members were just relocated. So yeah, NSMB MIGHT have hurt the Wario Platformers since it might take up resources that were or could be use for WL. But ultimately WL just need to find a new and suitable developer like DK and Yoshi did. I'm sure they would just let WL and NSMB exist both.

Also I'm happy there hasn't been an idiot yet that said it's Wariowares fault. But just in case let me make this clear, WarioWare is NOT AT FAULT. It's an completely different Genre. Made by different developers that currently don't possess the resources for this kind of game, if one would just look up their records. And Nintendo has no problem releasing both Warioware and W.Platformers together, afterall they did exactly that in the past (GBA, GC, NDS and WII). Sorry and thanks, but this needed to get out.
M

I think there is a good chance we will get a new Wario Land until the end of 2021. In november 2019 the leaker markomaro claimed we will see a new Pokemon Mystery Dungeon. He was right, we got a new Pokemon Mystery Dungeon. He claimed we will get a new Paper Mario. He was right again and he claimed that we will see Pikmin 3 Deluxe. He was right a third time. He also said that we will get the long rumored remake of Wario Land VB. I am optimistic that he will be right again. Maybe we will see Wario in the rumored Super Mario 3D-Collection like Super Mario 64 DS in 2004/2005. I can imagine Wario would be a playable character in the remakes of Mario 64, Sunshine, Galaxy or 3D-World. Perhaps with amiibo. There will be a day Wario comes back and I think the 35th anniversary of Super Mario is a very good opportunity. 12 years without a new Wario Land is too long. 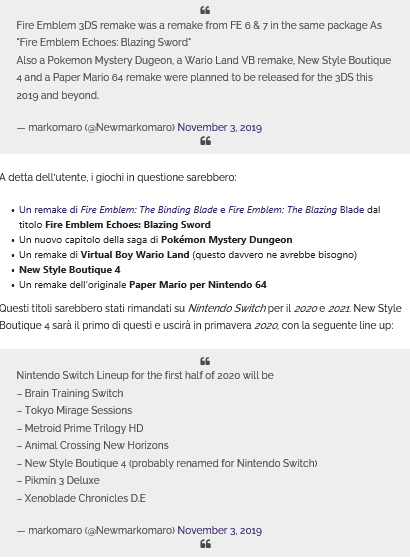 After Nintendo R&D1 dissolved, we only got one more Wario Land game (Shake It!), and it seems like that didn't meet sales expectations. You also don't see the same sort of clamoring for Wario that you do for, say, R&D1's more beloved child Metroid. I could see how the series being tied to Mario also might hurt it in terms of marketability--it's not as easy to differentiate it and maybe they don't want Wario hurting the Mario brand. All speculation, of course.

It would make sense to have Wario land VB as the last exclusive for the 3ds, since the game will be 25 in this year. But they're really strict and stubborn to their IPs, specially from development teams that no longer exist.

I guess so, though it'd also doom the remake's sales too. The Bowser's Inside Story remake didn't sell because it came out too late, and this would be even worse.