I think she means the Fever onwards artstyle, I disagree as well, but that's just different tastes speaking.

Anyway Arle appearently being such a big japan Smash Ballot character encouraged me to submit a vote for her as well, since I completely ignored the Ballot up until this point.

I still don't think that this will change anything, but if they are going to reach out and ask fans directly then I can might as well show that I as a western gamer care about Puyo, of course there is no guarantee that Sega will see the results, but I'm doing this under the assumption that they will.
Last edited: Sep 6, 2015

I already did that a while ago. And I've thought abut doing it on another device, too, though I don't know how...ethical that would be.

My friend asked if I voted in the ballot. He was just happy to hear I voted at all, even if it was for a character he barely knew about.

There really wouldn't be any shame in doing something like that, people do that all of the time with these kind of polls and to be honest I don't think that popularity will be the main deciding factor as to whether or not a character get's in , but rather whether or not Sakurai and his team want to work on a character (not matter how much they say that it's all about the fans) , espically if the K Rool costume is any indication of him not getting in, which is why I specifically noted things that would appeal to Sakurai, such as: potential for a unique moveset thanks to spells,the series having somewhat of a conection to Kirby thanks to Avalanche, along with a note that Puyo proper does indeed have a western following despite it's mostly japan only nature and the possibility of seeing two of the biggest puzzle game icons (Dr Mario and Arle) together, especially since Sakurai has outed himself as a Dr Mario fan and Puyo was partially inspired by the original game.

So yeah, I think that these things would make him interested in adding the character, what did you write down as your reasoning for her inclusion?

I don't remember, to be honest. Though I have thought up more reasons since then. She does have moves I see potential in.

Sorry for the double post, but apparently, 3D Gunstar Heroes was hacked into, and it had a list of potential future games to get the 3D Classics treatment.

One of those games was Puyo Puyo Tsu! Now, time will tell if it even gets made, and even if it did, there's still no guarantee of an American release, but it's something, I guess.

If it does get an American version, however, I know what I'm buying, even if it's untranslated.

The first thing that came to my mind with this was the Wii VC release of Tsu, the only re release the west has ever gotten, which would sound like this has a good chance, but then I remember that Tsu was also "coincidentally" one of those games where they could pull the excuse of it being an import title in order to charge more for it, so their motives for bringing that one over were pretty clearly based on getting more out of a singular release and nothing else.

Mind you if this came to the EU, I would get it no questions asked, no matter how much they charge for it, but Sega has yet to do anything that would give me hope in something like this happening.
Last edited: Sep 8, 2015

Whether or not it's coming over is still anyone's guess.

On a completely positive note: I DO love the artwork: Sourcegaming has made a graf that judges who the top 19 Smash DLC contenders in japan are:

Off course this doesn't need to be accurate, but if this is in any way indicative of the actual votes than that would put Arle firmly in 16th place, take out Roy who is already back and Banjo who is literally impossible thanks to Microsoft and that would put her two places higher, heck Ashley being an Assist Trophy and the Ice Climbers previously not working on the 3DS might already doom them as well, which would put her in 12th place.

Again this doesn't need to be accurate, but if we take this at face value than I'm sure that Arle is already getting at least some of the attention of the Smash team, if she is this talked about in japan, plus Sega being on rather good terms with Nintendo might make it a lot easier to add her, then to bring back Snake or introduce Geno/Cloud.
Last edited: Sep 14, 2015

I do hope this means there's a shot, but I won't hold my breath.

I won't hold mine either, but we really don't know anything about what decides who gets in, so I wouldn't rule out the possibility of her getting in quite yet.

Its kinda funny how I'm really rooting for Arle to make it into Smash, despite not being much of a Smash guy anymore (I ignored the Ballot for the longest time because of that), its just a good chance to show support for Puyo Puyo and the possibility of Arle and Kirby appearing in the same game, after Kirby's Avalanche/Ghost Trap introduced me to Puyo, is just too good to pass up.

HOT new vocal tracks coming our way(not really) real soon this time by the various non-human characters of the cast.
http://puyo.sega.jp/portal/goods/20151001_000898/
Some of these will no doubt be on par if not better lyrically than Arle's and Ringo's vocal themes.

I really wish I could read those song titles, but judging from the cover is it save to assume that we are in for a vocal version of Popoi's Fever 1 theme? It is part 20th Anniversary's soundtrack and all of the vocal tracks so far were based on character themes from that game and Popoi's Fever 1 theme was in it, even if it wasn't new.

Carbuncle is going to be singing to Arle's theme which isn't new either so that's probably the case unless he sings to the shop theme which is a remix of his original theme.

Makes sense, looking back Lemres kept his Fever 2 theme in both Anniversary titles and that didn't stop it from getting a vocal version, so yeah.

I think a remix of the shop version is more likely, but we have to wait and see.

The the title for Popoi's theme seems similar to what the name for his Fever theme is usually translated as, whereas the shop theme is simply called Welcome so it might not be the shop theme.

I just found out something that's kind of mindblowing. Anyone remember this game: 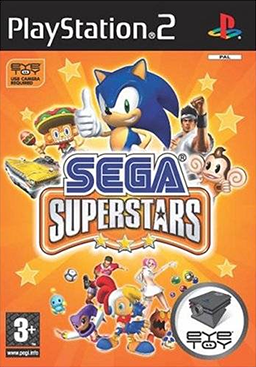 Sega Superstars is a collection of minigames based on several Sega franchises, that uses the PS2's Eyetoy camera.

It's not that good of a game, I find several of the games to be a chore to play and really only got it back then because "hey, it has Sonic in it, so why not?".

The game has a Puyo Puyo (or Pop if you go by the western name) Fever game in it, which I find more interesting nowadays (even thought the gameplay is completely different) because Fever wasn't out in the west yet, which also means that I wasn't into Puyo yet, for about two more years.

The reason I'm talking about this game is because I was thinking about how we never see any Puyo characters save for the Puyos themselves in Sega crossovers, however I did remember that this game always uses names for characters from the various franchises for highscores and I wanted to see if this applies to Puyo as well and sure enough: 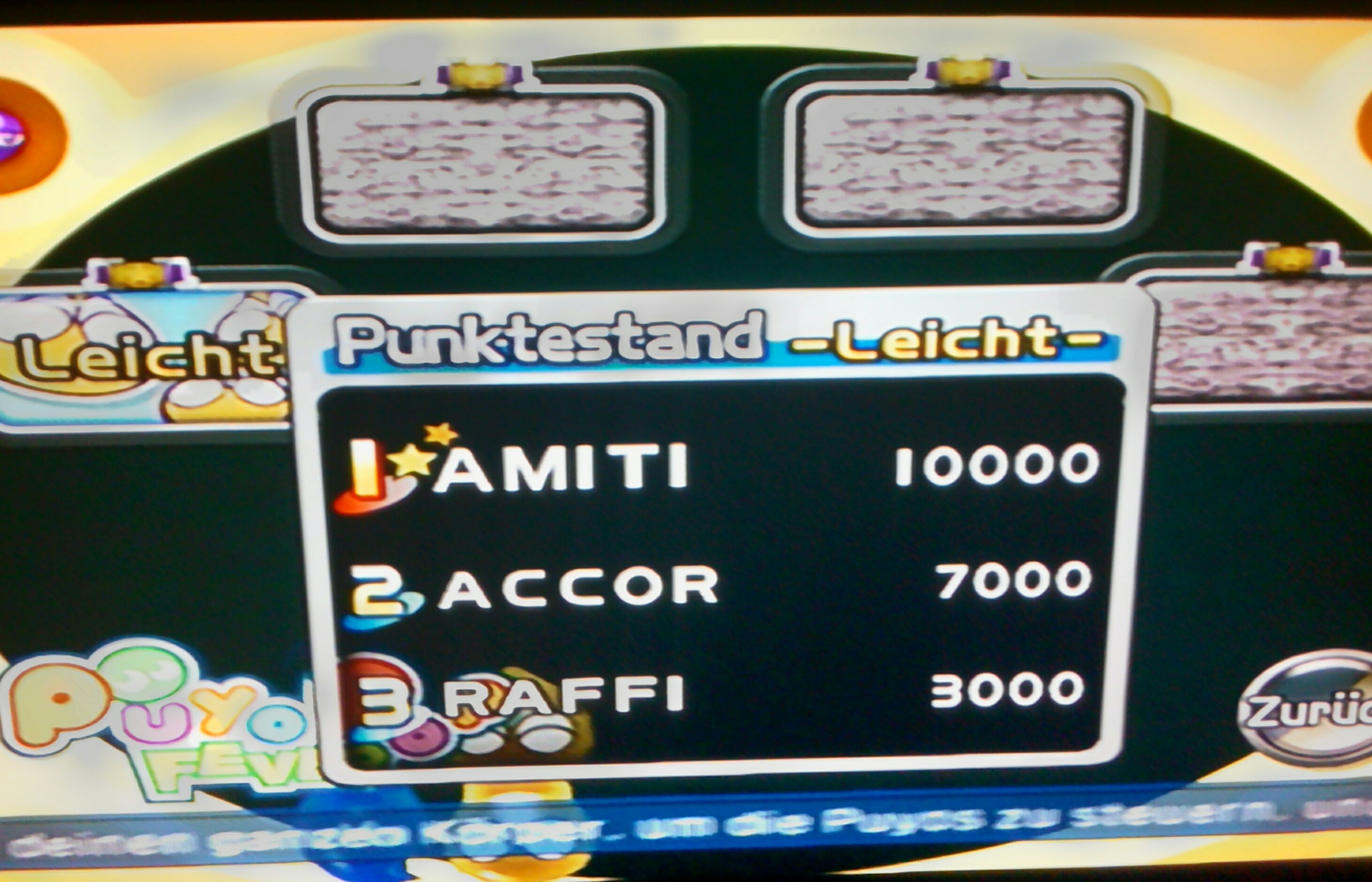 What's even more interesting is who I found when looking at the manual: 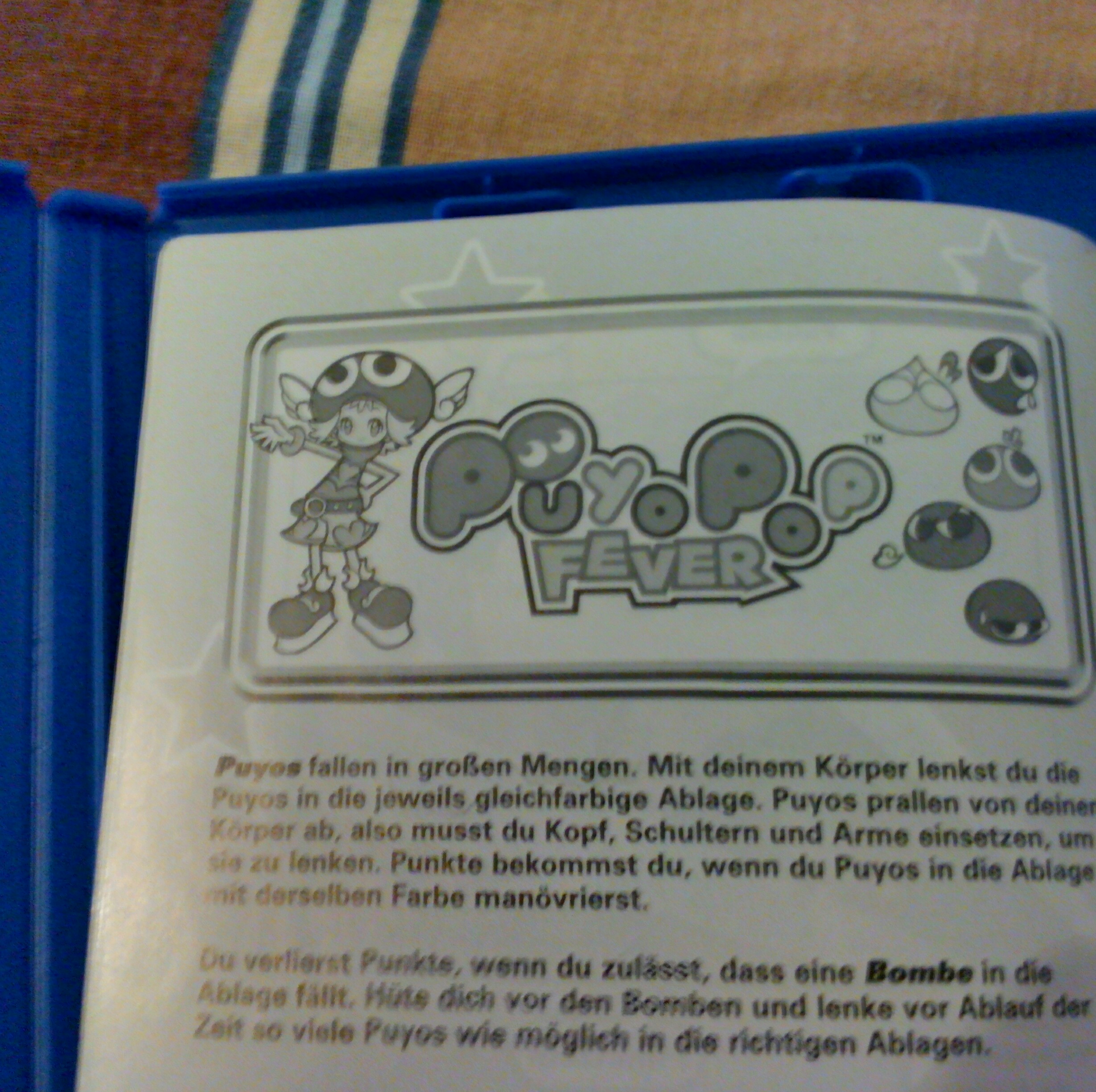 Yay, it's Amitie! Now keep in mind that this game came out in 2004, while Fever 1 didn't reach the west until 2006. So the manual (not even the game, just the manual) of Sega Superstars is the first western released Sega media to feature Amitie, that sure is somethin'.
Last edited: Oct 30, 2015

Too bad after Fever it just seemed Sega was absolutely against Puyo ever being seen outside of Japan for the most part.

On a positive note, we did get some fairly decent Puyo representation in Sega Superstars Tennis as well:
It's a good minigame, you even get to choose from several Fever 1 tracks and we do get some character cameos via the loading screens: 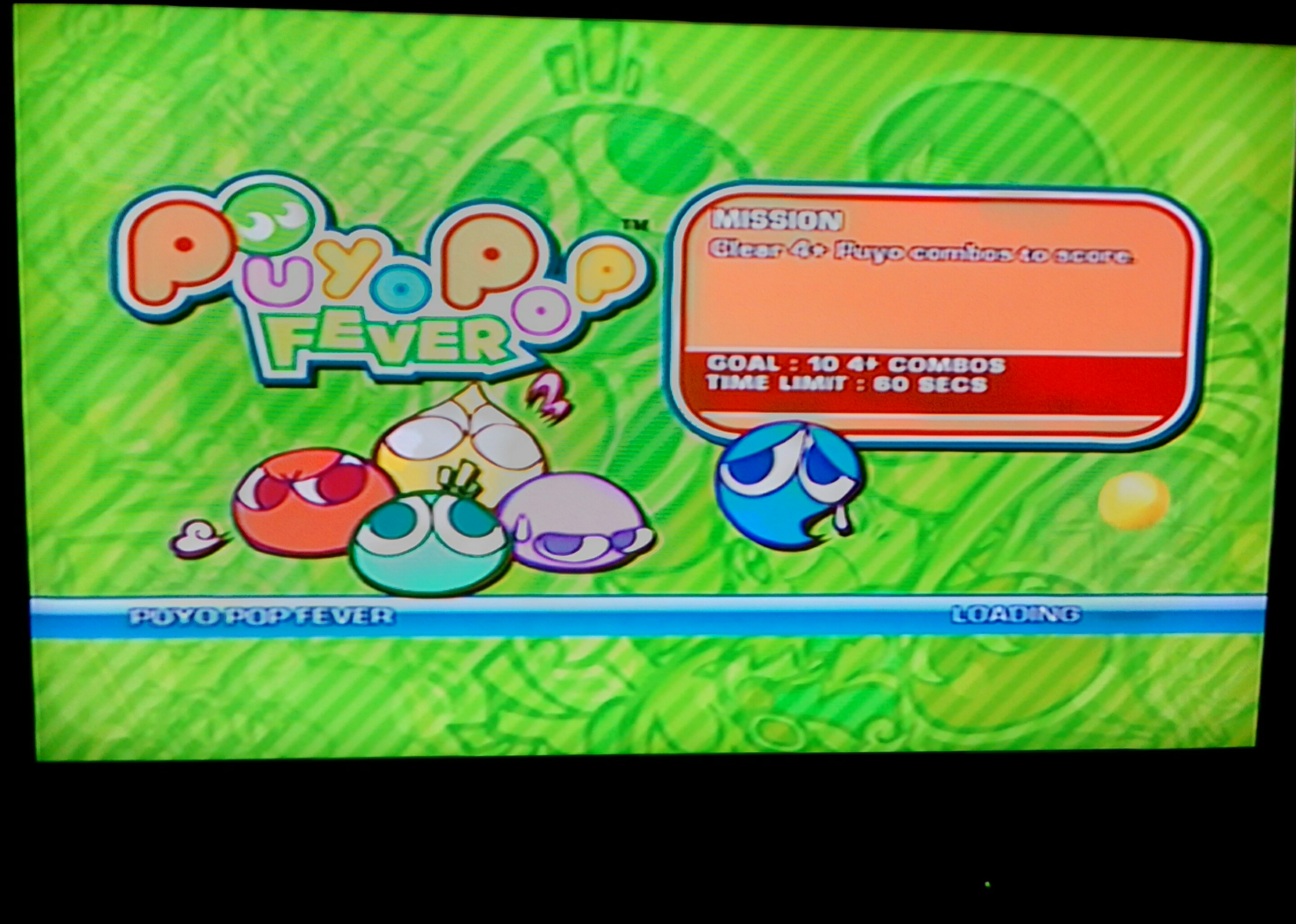 It's not the biggest thing in the world, it would have been nice to have a character or court, but it is a cool little Puyo thing we DID get at the very least.
Last edited: Oct 31, 2015

Sometimes stuff like this makes me mad. I mean yeah it's nice to get some stuff but sometimes it really feels like a tease.

Today is the 24th of November, you know what that means? Well this day marks the 10th Anniversary of Puyo Puyo Fever 2!

I do want to bring a bit of attention to this occasion, because while I did play Fever 1 before it, it really was Fever 2 that made me decide that I want to follow the series loyally.

To this day Fever 2 is still my favorite game in the series, the artstyle saw a massive improvement from the previous game, same goes for the story, the item system is pretty unique, I love all of the new songs it brought along and of course, there are the new characters, including the rather shortlived Gogotte and Baldlanders, as well as four new mainstays in the form of Feli, Lemres, Strange Klug and my personal favorite Puyo character ever: