Indeed it is, I also have these four from Super Puyo Puyo that aren't on the blog (as of yet anyway) : Compile era Puyo art is so hard to find that it's always an exciting thing, when something comes up. The owners of the blog have showcased that they have several other Puyo manuals and even a Madou Monogatari one, so that's something to keep an eye out for potential future Madou/Puyo updates.
Last edited: Dec 14, 2015

I always loved to collect fanart, it's always amazing how talented some people are, I always wanted to draw myself, but I just plain suck at it. Today I wanted to start practicing the Puyo artstyle by trying to draw this Sig:

I'm actually pretty proud of the end result, it's still not great, but for my standards and a casual first attempt, I think he turned out pretty okay: 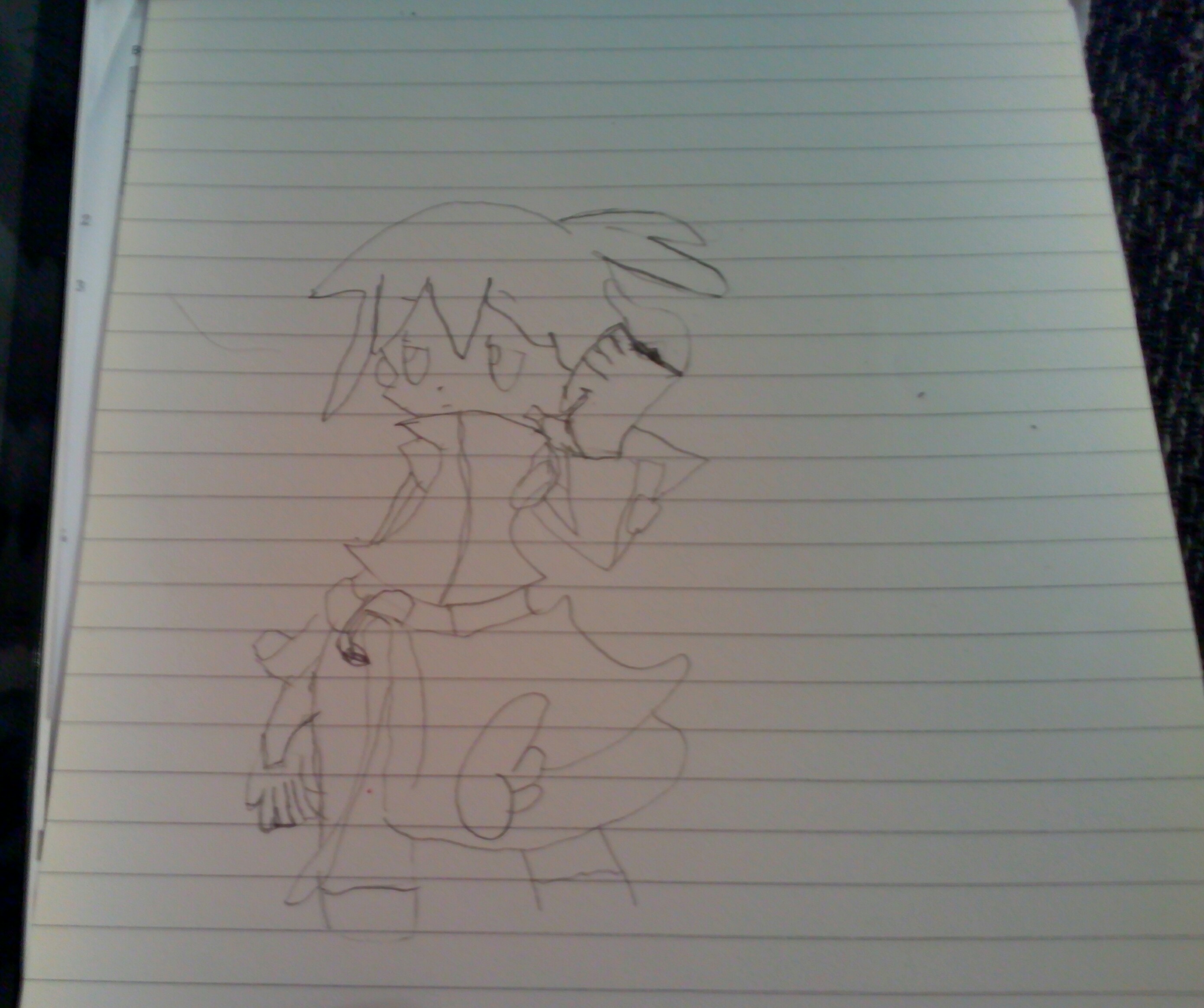 It's going to take a lot of time and practice until I will be able to draw quality original stuff, but I'm quite happy with how this first attempt turned out, especially with how much I suck at drawing.

Sorry for the triple post, but I just got done playing one game I always wanted to play: It's Madou Monogatari Tower Of The Magician, the one that stars Schezo as the main character!

I have expressed an desire to play this game (or any Madou game) way earlier in this thread, but was intimidated by the potential language barrier, while it's a bummer that I can only understand the story bits via fan translations, Puyo is easy to play and menu navigation becomes second nature after a while, Madou on the other hand is not only sparse on fan translations, but also a dungen crawler RPG, so I kept a video playtrough on stand by, in case that me not understanding anything could interfere with my progression. In the end thought I was very plaeasently suprised by how I really only needed it once near the beginning when I had to use the ice spell on a certain kind of door, other then that it was very smooth sailing, for reasons I will elaborate on. Like with Paper Jam I will write in categorys, because thats just easier for me.

Story
This is the one part I can't fully judge for obvious reasons and I do wish I could understand the dialog, but the basic story works well enough.

Basicly Schezo is on another quest for power and heads to the titular Tower. As it turns out the Tower is owned by Wish, wo turns out to be Witch's grandmother, Witch tries to find her and meets up with Schezo several times, as it turns out a villain under the name of Dark Matter defeated Wish , infiltrated the tower and Schezo needs to stop him in order to prevent inpendending destruction.

Again, it works well enough for me, especially since I always love to see these characters in action.

Graphics
This is one of many titles that came with Compile's Discstation magazine and for those standards I think it looks quite nice, the enviroments are a bit repetetive, but that comes with the genre and the character sprites are pretty good, particulary in battle, where the get to show some very fluent animations, special mention goes to a little baby Elephant that Schezo befriends after defeating Incubus, since he actually cheers Schezo on during battle, in all kinds of funny and adorable ways,

The biggest plus for the visuals for me, is that they visualize a ton of things, for instance, instead of plain text every attack and item has an icon, meaning that you don't have to memorize how let's say: Areiado is spelled in japanese and where it's located on the grid, which makes for a very user friendly interface.

Music
The music is quite good, while it doesn't hit thr catchyness of a typical Puyo Puyo song there are some very memorable tracks, such as the final boss theme, which is essentially a somber rendition of the main theme and the song that plays whenever Witch appears will forever be stuck in my head for all the right reasons:

Gameplay
The game is a first person dungeon crawler and orientating myself took a bit of time to get used to, thought even then the map system was a big help in that it not only shows the layout that you already explored, but also the direction you are facing, which made it easy to travel around, until I eventually was able to do it myself with ease, but even later on the map proved itself to be useful for many puzzles.

Speaking of which the puzzles were the one part where I was really afraid that I would have to constantly consult the playtrough, becaus again: language barrier, but outside of that one example solving puzzles wasn't a matter of reading and understanding hints, but rather observing your sorroundings and studying the map in certain cases. Starting with floor 3 all of the floors have one specific gimmick and it's up to the player to learn that gimmick in order to get through, one of my favorite examples is floor 4, which is essentially broken off in two halfs, ín the first one you collect three black orbs and in the second half you put them into three broken fountains and color them in specific ways that are shown on the walls within that specific half, with the map proving its worth by putting the fountains in the same order as the wall drawings. That's how puzzles work in this game, as long as you pay atttention you should have a good time solving them, I personally had a blast.

The battle system is pretty standard RPG fare for the most part, one unique thing is that Schezo's health isn't displayed via numbers, but rather his facial expressions and animations during battle, which is charming and something that's been a thing since the first Madou Monogatari. Other then that you fight enemies with your offensive and supporting magic, level up, find treasure chests, buy items from ''shops'', all that good stuff that you expect from an RPG.

So yeah, I have been looooooong overdue to jump into Puyo's parent series, but overall my first venture into Madou Monogatari was a very pleasent one and I'm eager to catch up on the rest of the series.

What even is this game? I never heard of it until this post and I still don't know what it is. Warioware like game? puzzles like Mario's Puzzle pusher?

Kyon said:
What even is this game? I never heard of it until this post and I still don't know what it is. Warioware like game? puzzles like Mario's Puzzle pusher?
Click to expand...

You may have experienced it as either Dr. Robotnik's Mean Bean Machine or Kirby's Avalanche.

Oh, you should have said so! I hated Kirby's Avalanch, because as a kid I had no idea what I was doing and I'm still not sure what they are doing in this game, is it like tetris 2.0?

Sort of like that, it's one of those falling block puzzle games like Dr. Mario. Connect 4 or more Puyos/Beans/Blobs/Ghosts/P-Kids/Quirks/whatever and have them arranged in a way that creates chain reactions. Make larger chain reactions to attempt to defeat your opponent.

I have wanted to be able to record videogame footage for a while now, this year I will finally try to invest in proper recording software, for the sake of being able to share footage of my rubbish gameplay (with Puyo being one of the franchises I want to feature on my channel).

Until then thought, I figured that I could tinker with Freeware options and emulators, until I get the proper recording software, I still have to experiment with audio capturing and with this being Freeware the quality obviously isn't the best, but for the time being and a short test video it works well enough for me.

With that said, here is some rubbish Puyo Puyo gameplay from yours truly :

Just a quick update, I switched to a different software and can record sound now, the resolution is low, but that's a neccessary evil, since the sound would lag otherwise (as you can still hear in the beginning), that's something I still need to work on, but I'm actually quite happy with what I can do now.

With that said, have some Endless Fever, not my best run, but I'd like to think it's presentable:

I've sorta been wanting to get into this game. I remember seeing the one for GBA a long time ago and thought it looked cute. The combos look pretty involved to set up though.

The latest Sega Central episode has a very notable appearence of Puyo Puyo Tsu (2:16) :
This could be a tease for a western release of the 3DS version and tommorow is thursday, which is always the day for european Eshop releases....but at any rate I will remain cautious.

It was on the Wii Virtual Console so it would not be surprising to see it again.

Granted it was teased in Sega Central, which is Sega Europe, so I won't panic just yet, but I'm not really sure what to expect.......either way I'm happy for you guys, if you happen to live in 'murrica.

dissapointing it's not a double pack with the first compilation. After Burner II and Galaxy Force II are by far the most interesting games to me from the 3D classics line and I'd have like to have them both on the same cart.

That made my whole week so far a lot better.

Not really impressed at all with this collection but I'll take it I guess.

On second thought I change my mind. The selection is really weak and the 3D for Puyo is pointless. I don't see why you guys are so excited it's not like this is a good sign for overseas Puyo fans. Aside from the rebuilt coding, this just looks like a throwaway collection put together that was initially Japan only but got localized for God-knows-what reason. Sega disappointing yet again. Passing.

True, true. Still, I'll take what I can get, and it's better than no sign.