Isn't breaking things in microgames fun, after fixing it?

Week 29's You Break, You Buy features microgames where breaking certain objects, from rocks in You Can Lead a Robot To Water to an entire skyscraper in Crash Course. Another one of those themes that makes much more sense when you see it. Perhaps the stronger characters such as Wario are a good fit for this.

I aten'd dead! Sorry about not posting for the last three weeks, just been too busy. Yes, I did do every Wario Cup, though, so this will be a hopefully rare triplepack of Challenges; Week 30, 31 and 32.

To some extent, that's because the former two features everyone's least favourite characters. Week 31, Non-stop Ninjas, features, you guessed it, Kat and Ana in Double Play. Of course we all saw it coming. A lot of the time filling the screen with shuriken as you would in Friendless Battle works, though there are some very annoying challenges. Ice Climber is my nemesis here. Still, it's not as bad as...

Week 31's Yo-yo Time. Ah, yes. Just take Week 1's challenge, make it a Time Attack, keep the near-fast speed, and you've this awful monstrosity. This is the reason why I put off posting this for so long. Just... 9-Volt. Timing. Hope you made it.

Week 32 is a bit better. For once, it's themed around microgames, not a crew member again. This time, it's all about microgames with pushable objects, so naturally Wario and other characters who attack directly are quite great. The unusual rules.

These past four weeks I've been away have been a disaster. Original computer died, real life commitments, my tendency for the replacement laptop to freeze randomly... but here, have a belated terapack. My first attempt to write this, let's hope it doesn't freeze.

Week 33 is called Twice as Nice, and throws the most crew members at you in Double Play ever. You've got an eclectic character set from classics like Ashley and Kat to newcomers like 18-Volt. Just last as long as you can, and so I did at 5,276, a Silver.

Starring Penny is exactly what it sounds like. I haven't been the prolific Penny user I've been in the past so this was certainly a jolt awake. As someone who only rarely pause scums, I also found it difficult to get a good time; only 0:53.65, Bronze, in the end.

Money, Money, Money! is coming in for Week 35. Bit of Wario Deluxe creeping back in, there. Well, in any case, they're themed around collecting things. Simple, right? Well, not for Wario. 2,224, Silver, on my end. Not quite money.

IQ Test-o-rama continues the Test-o-rama saga with endless IQ testing fun. Not so fun is some microgames, most notably Block Puzzle which is quite difficult to do at speed for me. With 18-Volt, I got 4,108 for a Bronze.

Well, sorry to be so late, but I'm finally back. And I made it!
T

Yep, you've guessed it. The laptop that gave me a, well, spark of hope (that game's title) died again. And it took me this long to find the time to type this up on another replacement.

So, let's get back to work on covering June's and remainder of May's challenges, counting up from Week 37 up.
For real though, I can say that I'm back, finally. 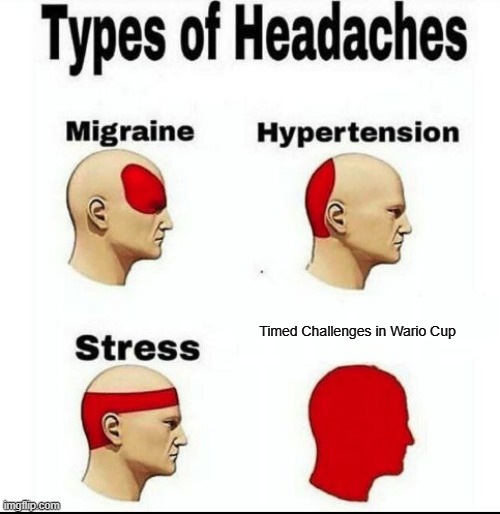 Another three challenges in the bag! Hey, at least the wait time wasn't as obscenely long.

*Week 44's That's Pushing It focuses on pushing things. Wario's specialty! But I also made sure to bring along 5-Volt and Jimmy T for the ride. This theme feels... kind of familiar, but I still managed a 2,580 point best for a Gold.
*Magic Formula is another highly experimental character pairing, though at least not in Double Play. You swap between Penny and Ashley, and just last as long as you can with the constantly swapping controls. I managed 5,518, or a Bronze, with this pair.
*On Repeat... what a lame challenge. The title doesn't make any sense, and the description seems misleading. You would think there'd be a repeating set of microgames, but it's just like any other collection... without repeats, only just appearing in the same order like Speed Skater. I managed a time of 0:48.95. Some microgames are real run killers, for example, Slime Time due to its RNG, and that is why I struggled with a time better than what I got.
You must log in or register to reply here.
Share:
Facebook Twitter Reddit Pinterest WhatsApp Email Share Link
Top