Do you think there should be a Wapeach and Wadaisy?

I was never particularly enthused by the idea, but then I saw this pic on Facebook and now I'm thinking it could actually be pretty fun, if they did it right:

What do you all think?

No, I don't think we need more WA’s personally. Wario and Waluigi are just fine as is and even the latter was slightly pushing it a bit, even if I do like him. I would rather see new female characters and/or have underused characters like Mona, Ashley, Goombella, Shokora or Captain Syrup appear than WA versions of already existing characters. If Wario needs a female partner, well…Mona is right there and ripe for the picking.

That said though, I'll be lying if I said I'm not down with those concepts, because those are really creative and fun.
If we get designs like that in the games (which let’s be real, we won't), I’ll probably be accepting of the idea, even though I would prefer new or underused characters instead.
Last edited: Oct 3, 2021

I mostly agree with TB100. From the very beginning, what does Wapeach even mean? U want a love interest for Wario, u got Mona. U want a more evil and disgusting female Mario Chara and u got Captain Syrup. Now Mona isn't really evil or disgusting and Syrup is more of his rival/villain then a love interest. But there's no need to create a new Chara just to combine these things, just use the Charas u already have.

But if it's about Waluigi I would be down for him to get some kind of female partner. Dislike the idea of coupling him with already existing charas. Plus that guy is starving for some spotlight to give him more characterization. Just don't make it have anything to do with Wario or even Mario.
But I don't necessary think it needs to be another WaChara. From the very beginning, Mario&Peach, Luigi&Daisy, Wario&Mona all of these couples are mostly based on differences. Would be more weird if a couple looks the same.

Haha, I love the Tumblr artists' take on the concept.

It's something I'm kind of torn on, honestly. On one hand, I find the idea hilarious, but on the other I don't think it's needed. I feel like Captain Syrup is the closest character we have to a "Wapeach" and I'm cool with that. It's just up to Nintendo on whether or not they want to make her as important of a character as Peach and Daisy. (I'm kind of hoping that they'll introduce Syrup in something and she'll have a massive boom of reinterest, like what recently happened with Pauline)

As for a girl/female equivalent for Waluigi, well... xD

Thinking more about it, I think the main situation where I'd be cool with the idea of Wapeach and Wadaisy is if it was tied into giving Wario and Waluigi a proper origin. Like maybe you could have the Mario bros travel to an alternate dimension populated by corrupted versions of everyone. Wario and Waluigi would still be the only ones to become full time residents of the regular dimension, but it would be cool to see a universe in which they were the counterpart to Mario and Luigi, and how they would react to the regular Mario and Luigi.

To be honest, I do concur with the opinion that there shouldn't specifically be a Wapeach nor Wadaisy. We already have enough underused Wario series characters as is; why would we need specifically an inverse Peach that'd also go unused after she's through?

What if there is already a wapeach? 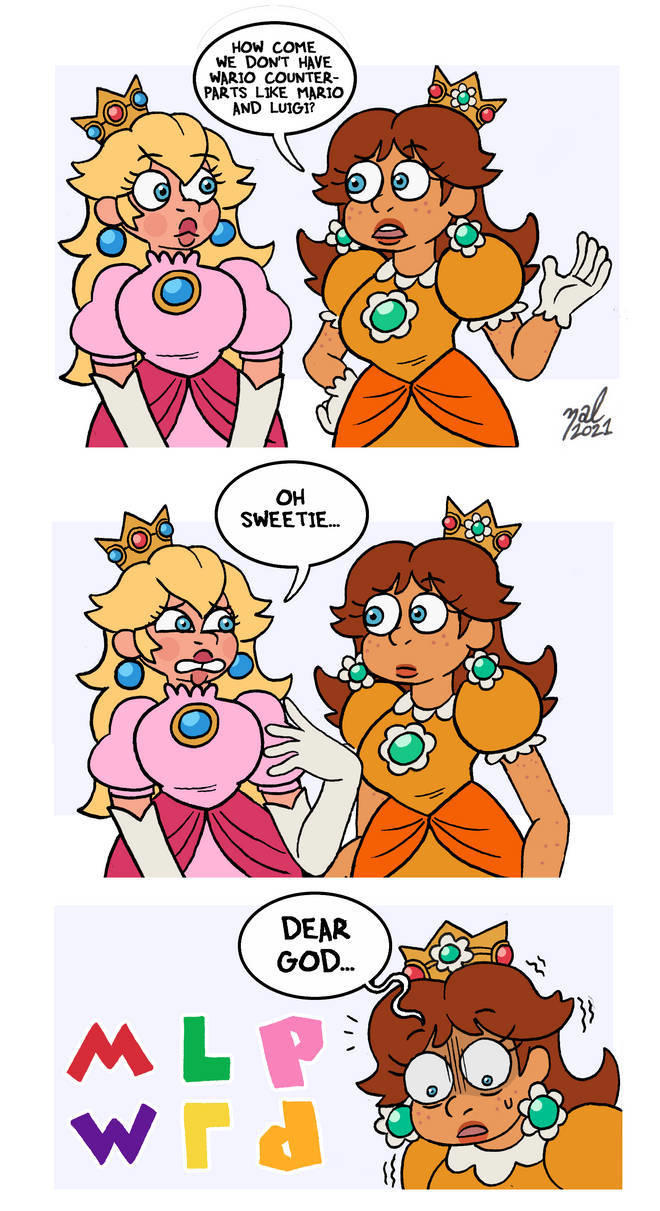 ToiletDuck said:
What if there is already a wapeach?
View attachment 13027
Click to expand...

THERE it is, I thought about this instantly but couldn't remember where I saw it.

Waluigi said:
I was never particularly enthused by the idea, but then I saw this pic on Facebook and now I'm thinking it could actually be pretty fun, if they did it right:

also, I do enjoy the idea, but like most of us I feel it's best if the Wa thing remains as unique as it is.
The existing Wario women are anti-Peach enough as is just by behaving like human beings. Not to mention Shokora exists.

As much as I like these hypothetical characters ("Princess Plum" looks almost exactly like how I picture Wario's mom), we should stick with the characters that we have now. There's no need to bring any other (female) character into existence just for the sake of "balancing things out a bit", so to speak.