The Media Create Charts for Sept. 16 have the game selling the same number of copies in the same position, bringing the sales total to 93.658

Game is Gamestop in europe. (We had Gamestop but Game bought the franchise)

Glowsquid said:
The Media Create Charts for Sept. 16 have the game selling the same number of copies in the same position, bringing the sales total to 93.658

Thanks, didn't know about that site. May bookmark it now.


No Name said:
Game is Gamestop in europe. (We had Gamestop but Game bought the franchise)
Click to expand...

The guy who post NeoGaf/Resetera's weekly Japanese sales thread has recently stated that WarioWare Gold's sales in the USA are "July+August USA < 50% August Japan " . I don't know what insider knowledge he has but resetera frequently has NPD members leaking numbers or giving hints and the guy has been doing this for a ridiculously long time so in the absence of more direct sources I'.m going to assume he's not completely unreliable. If I base this on the Famitsu numbers (as they are what the guy uses for his personal website I linked above) which had the game close the month at 96k units, this would put Gold's USA retail sales from August to early september in the 40k-45 k range
Last edited: Sep 25, 2018

Disappointing, but not too unexpected. The 3DS is doing even worse in the US and Europe at the moment than it is in Japan right now.

CM30 said:
Disappointing, but not too unexpected. The 3DS is doing even worse in the US and Europe at the moment than it is in Japan right now.
Click to expand...

besides NOA can't have lost too much money on the game considering the apparent low volume of copies shipped and non-existent marketing (beyond twitter sheanigans).

I plan to make a post sometimes in the beginning of the next month talking about WW Gold's performance vis-a-vis other 3DS games and what I think it means for the series, but for now I'll bump this thread because through one of my obessive googling session, I found a guy on smashboard with some choice words thread. Functional human beings don't make pissy responses to months-old message board posts from complete strangers, but well, I'm not a functional human being. plus I figured if other lurkers have similar objections, that give me a tribune to answer them. 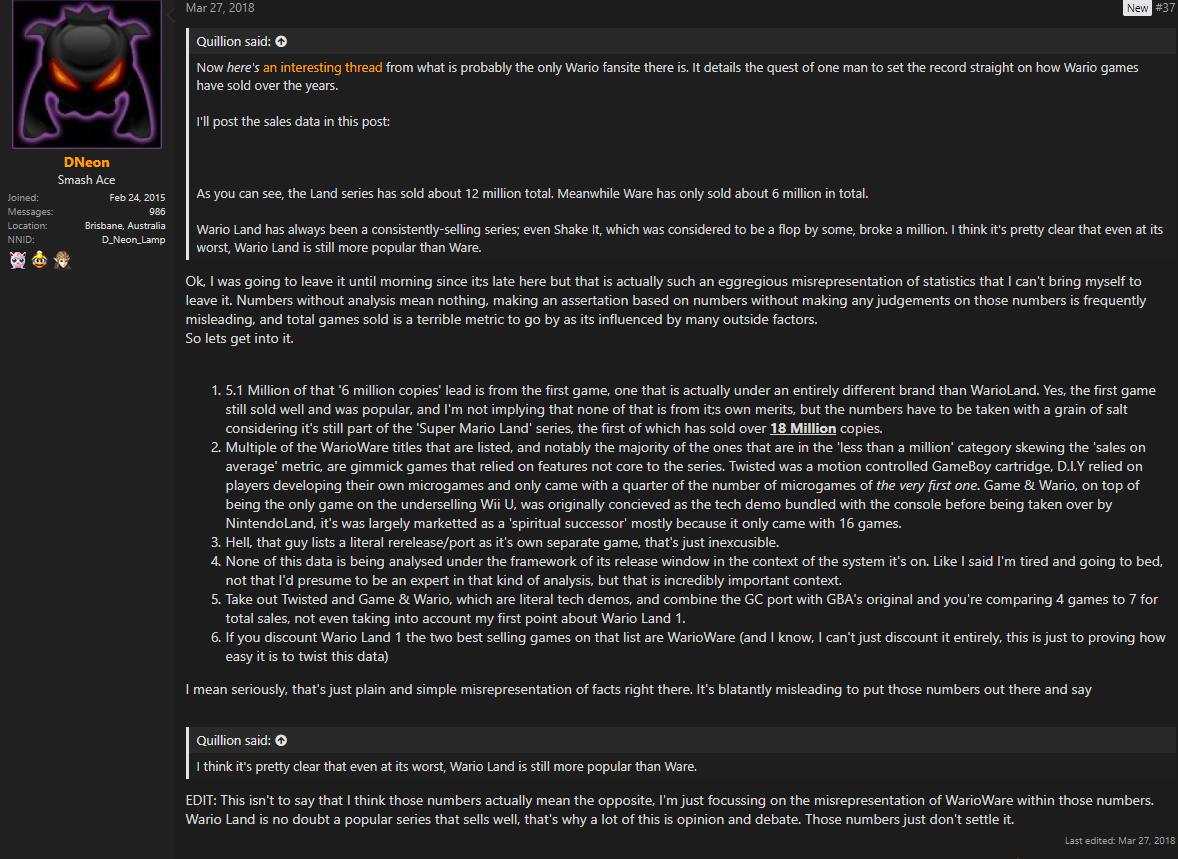 -Saying Twisted "doesn't count" makes no sense. It has the same structure as the first game, was marketed as a straight sequel and does not require access to a separate system or accessory since the motion sensor is built-into the cartridge - how is it more of a "gimmick game" and a "tech demo" than Smooth Moves or Touched? If you're going to dismiss it, the more cogent reason would be because it was the only one not to be released in Europe (but judging from GBA games sales by that time, that probably wouldn't have changed much)

Game & Wario also being originaly developed as a "tech demo" means nothing (after all, so were things like Luigi's Mansion). It was sold as a retail game, and it sold badly.

-Mega Party Games is a separate SKU, released on a separate platform and listed separately on every sales trackers and Nintendo's own financial reports. Listing it separately is in fact very excusible.

As it turns out, we do have sales for one western country in WarioWare Gold's case; specifically Spain, where according to the magazine Hoby Consolas, the game apparently sold a very not impressive 1.700 copies from launch to the end of August (You can see how it compares to some other games here). Hardly the most major videogame market, but hey, hard numbers!

To be honest, I would expect sales in European countries to be largely similar.
Last edited: Jan 10, 2019

while WarioWare Gold's dropped out of the 20 for all Japanese sales tracker, it's proven to have good legs and hasn't left the top 50 since launch. Unfortunately media create doesn't post numbers for games outside the top 20 so that leaves Dengeki Online, which has the game at 138k copies as of December 30.

For reference, here's how it compares to other 3DS games released in 2018:

As you can see, it's not the only best selling new 3DS game for 2018 (though not the best-selling period, as both Mario Party Top 100 and Pokemon Ultra Sun/Moon sold more during the year), but the only one to break 100k at retail.

So yeah, while it's on track to be the lowest-selling game in the series after Game & Wario and the download-only games, it's a 3DS game released in mid-2018: context matters. Not a hit but not a flop, it should be profitable with its Japanese sales alone and its sales vis-a-vis other 2018 3DS games should show Nintendo the series still has life left in it despite the failure of Game & Wario and the nearly decade-long gap between games with "Made in Wario" in the title, and that a Switch entry could be succesful. The amount of promotion NCL has given to the game 4 months after the fact would also indicate to me they are satisfied with its performance.

If it helps contextualise its performance, the Mario & Luigi Superstar Saga remake sold a total of 71k despite coming out a year earlier in a completely dead week - and that was still enough to greenlit a sequel. So...
Last edited: Jan 11, 2019

WarioWare Gold is definitely doing better than expected. God, can you imagine how well it'd have sold on Switch? Probably have shipped a few million copies by now.

As for Mario & Luigi... ouch. That series is seemingly on the way out about now, since sales since Paper Jam have been absolutely dire. Why the hell Nintendo aren't pushing AlphaDream to release it on Switch we'll never know, since only the very slowest customer are buying 3DS consoles/games right now, and those people tend to prefer Mario platformers, kart, Pokemon and Zelda to anything more niche.

Well, like Glow said, despite those “low sales” they still bothered to remake another M&L game, and they’re still bothering to put out WWG character trailers on YouTube all this time after.

Safe to say Gold is no sane man’s definition of a flop.

Greedy said:
Safe to say Gold is no sane man’s definition of a flop.
Click to expand...

-None of the microgames can take that much effort or progamming expertise to make. In the Iwata Asks for DIY, Goro Abe said he'd make a complete microgame (graphics, design and programming) for the original WW in a day's worth of work - and it was the 2nd videogame ever he worked on.

-There are no complex systems to program or balance. The scoring system is very simple.

-A good chunk of the microgames use graphics directly ripped from other Nintendo games. Someone on TCRF found one of the games in Smooth Moves uses a NES emulator to render the background graphics, and IIRC, it's not even one of 9-Volt's game.

-The games are quick to make - Touched was made in five months.

-The voice acting probably did drive up cost in Gold's case, but (as far as the Japanese dub is concerned) all but one of the VAs are no-names.

so yeah, my take is that if FIre Emblem Awakening, a more complex game with good production values (though IDK how much voice acting it actually has?) and no previous 3DS FE to recycle stuff from needed "only" to sell 250k to keep its series going, WW Gold probably has made some money with what we know about its sales - but in abscene of information about its budget or Nintendo's expectation for the title, it's all (educated) guesses.

CM30 said:
As for Mario & Luigi... ouch. That series is seemingly on the way out about now, since sales since Paper Jam have been absolutely dire. Why the hell Nintendo aren't pushing AlphaDream to release it on Switch we'll never know, since only the very slowest customer are buying 3DS consoles/games right now, and those people tend to prefer Mario platformers, kart, Pokemon and Zelda to anything more niche.
Click to expand...

Despite it's launch sales being fucking miserable over there (10k? Ouch), I doubt it'll be enough of a blow to kill off the entire Mario & Luigi franchise.
After all, it's not like this is a new game or what not, it's just a remake that is reusing the same exact engine (and I imagine most assets if possible) from Dream Team and Paper Jam, so It couldn't have been too expensive to develop or what not.

Also, AlphaDream explained why they put this game on the 3DS instead of the Switch in a interview with gameinformer recently.

Gameinformer said:
Why isn’t this remake on Switch?

Maekawa: It has to with the timing for it releasing on 3DS as opposed to Switch.

Akira Otani (producer, Nintendo): We did think about Switch, but we wanted to maintain the gameplay using the dual screen of the original. That’s the main reason we decided to port to 3DS.
Click to expand...

So there you go.

Anyways, back on topic and my thoughts on Gold's sales overall.
I'm not surprised Gold did only okay as I was expecting it to due to it being a late entry title and what not.
At the same time though, I am both surprised and very impressed at how well it did compared to other late entry 3DS titles and I'm happy to see
Nintendo is satifised with it enough to continue promoting it via the character videos and what not.

Really at this point, I think it's safe to say WarioWare is in a somewhat good place for right now, not the best place it could have been in (God, Imagine if this was released back in 2012-2015 when the 3DS was still in it's prime instead of on it's way out), but it's still in a better place then where it could have been. *Looks sadly at Wario Land and it's lack of games since Shake It*
Last edited: Mar 20, 2019

I’ll say this much, I don’t think Ware is being focused on “over” Land, at least not outside of Smash (not that either series is represented well in that). WarioWare was a thing for what, five years, by the time Shake It dropped? I don’t think Ware has much to do with exactly why Land isn’t getting many games.

I just hope the Switch gets a game with Wario in the title sooner than later, and I don’t mean on that NES app either.

Greedy said:
I’ll say this much, I don’t think Ware is being focused on “over” Land, at least not outside of Smash (not that either series is represented well in that). WarioWare was a thing for what, five years, by the time Shake It dropped? I don’t think Ware has much to do with exactly why Land isn’t getting many games.
Click to expand...

That list includes games that didn’t release in 2018, pretty much telling us what we already know.

Greedy said:
That list includes games that didn’t release in 2018, pretty much telling us what we already know.
Click to expand...

That the 3DS is a cheap kid gift bought alongside discounted old games? Yeah

It's not a good result but I don't think think Nintendo is going to hold it against the series since Luigi's Mansion is only #8 despite being #1 for three months and Detective Pikachu is only #5 despite having the Pokemon brand + the hype of an hugely anticipated blockbuster movie behind it
Share:
Facebook Twitter Reddit Pinterest WhatsApp Email Link
Top